Back up all of your Windows files and folders that you don't want to lose. As long as you have enough free hard drive space for your new Ubuntu partition, this process should not interfere with Windows files. Should is a risky word, though.

Windows 8.1 has a "make a recovery disk" tool, but I found it useless and non-functional when it came to restoring the backup I made with it. The most straightforward way to preserve the files you don't want to lose is to just open Windows Explorer, and copy them to a backup disk. It takes forever, but it's worth it.

Step 2: Disable Fast Startup, and shut down your computer

You'll need to be logged in as an administrator to do this.

It's very important to disable Fast Startup before installing GRUB, because whether the Ubuntu installer can detect Windows' presence depends on how Windows represents itself in the boot partition. With Fast Startup properly disabled, it should be detected. Detection will be covered in step 4.

Windows 8, 8.1, and 10 use this fancy new thing called Fast Startup, which tells your firmware to load a special bootloader that restores the system to its pre-shutdown state very quickly. Pretty cool, huh? Well, because it changes the EFI system's next-boot option, this feature will have to be disabled while you're installing GRUB. This can be done by doing the following:

More detailed instructions can be found here. You can re-enable Fast Startup after installing GRUB, and it seems not to cause any problems with Ubuntu/GRUB booting. Just make sure it's disabled during the installation.

After you've disabled Fast Startup, shut down your computer. Since Fast Startup is disabled, Windows will do a complete shutdown, and not change the next-boot option in the firmware's EFI manager. (Layman's terms: Windows won't tell your HP system to boot its Fast Startup file when it's next turned on, so it will use the EFI boot manager's list, as it should. GRUB will place itself first on this list.)

Step 3: Set up the partitions with gparted

Before installing Ubuntu, you'll want to use your live CD/USB to make a separate partition for it. That way, it *won't overwrite Windows.

*Make sure you've got a backup. No guarantees- this depends on what Windows has decided to do in your boot partition, and it may also depend on which Ubuntu version/distribution you're using- I haven't used them all.

To make the partitions, you need to boot to your live CD/USB, and open gparted. There are plenty of tutorials on using gparted, and it's pretty easy to figure out, so I'll leave the specifics up to you and the Internet.

Please be careful here. Deleting the wrong thing can cause huge problems.

Before installing Ubuntu, we want to make sure that the ghosts of past OS installations aren't going to come back to haunt us in the future. In a UEFI system, operating systems use EFI (extensible firmware interface) files to tell the firmware: "Hey, I exist. This is where you can find me." When a new OS is installed, it adds an entry to the EFI Boot Manager's list, which gives it a unique entry number, and tells the EFI Boot Manager where it's EFI file(s) is/are (Windows registers several different EFI files- one for regular boot, one for a recovery boot, one for Fast Startup- possibly more depending on your firmware and your OS version). The EFI Boot Manager also keeps track of the boot-order: a list of entry numbers that specify what gets booted first. If you've been using EasyBCD; bcdedit; Windows' Boot Repair or Recovery tools; boot-repair in a Linux OS; or even if you've updated Windows or reinstalled it, there's a good chance that your EFI entry list now has some duplicates. At least, that was the case with mine. Having duplicates here can bog down your booting process, as the firmware sifts through the out-of-date or wrong-file entries until it finds a bootloader that works. It can also cause a boot-loop, where bootloader A points the firmware to bootloader B, which points it back to A, and then things start to take a very, very long time...

Anyway, to view your EFI entry list and see what needs to be cleaned, use the efibootmgr package with your live CD/USB. You'll need to install it using sudo apt-get install efibootmgr in a terminal, then run it using sudo efibootmgr. By default, you'll get a list of entries that looks something like this: 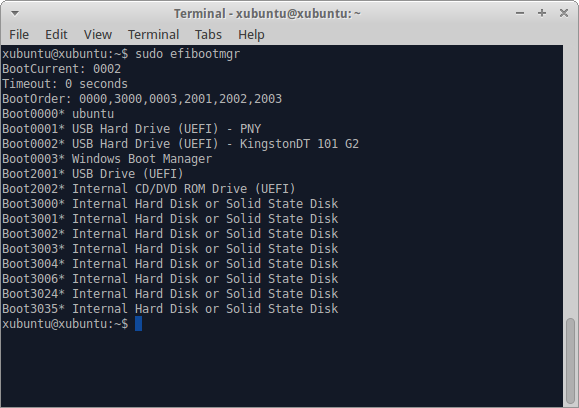 When I first used this tool after fiddling with EasyBCD and bcdedit trying to get things to boot in the right order, I had over a hundred entries here, most of them duplicates.

If your boot manager list isn't too cluttered, or if you're not comfortable deciding what can be deleted and what shouldn't be deleted, just skip to step 4.2.

To clean out any entries you don't need, use efibootmgr -b , where hex_number is replaced by the number listed with the boot entry. So, to remove the USB Drive (UEFI) entry (numbered Boot2001) in the picture above, I'd use sudo efibootmgr -b 2001 -B. You'll notice that I left some duplicates (all of the 3000+ numbered entries). You can use efibootmgr with different options to view some other attributes of the entries, such as the file paths they point to. Those entries look like duplicates, but they all point to different files used by my HP laptop to update its BIOS. Please be careful what you remove. It can be very difficult or impossible to replace things here. You can also use efibootmgr to change the BootOrder, which it displays. See the man page for more information on this useful tool.

After you've cleaned up the EFI Boot Manager entries, if you chose to do so, it's finally time to install Ubuntu. With your live CD/USB loaded, select the install option from the bootloader menu, or launch it from the desktop after logging in. Choose your options on the first page of the installer. The second part will look something like this: (I'm using Xubuntu 14.04, so your installer may vary, but the options should be pretty similar.)

If your installer doesn't detect your Windows installation (like mine), you'll need to select the "Something else" option. From there, you'll get a screen that looks similar to the gparted menu you used to set up your partitions. Simply select the partitions you made, and assign them to the correct mount point by selecting a partition and clicking "Change".

You should have an installation disk for Windows 10. Before you start installing, make sure you have your product key nearby, or you won't be able to install/upgrade. When you boot to the installation CD/USB, the installer is pretty simple. A bit too simple for my comfort- the only button was "Install Windows 10" or something like that, and Windows 8, 8.1, and 10, are infamous for their behind-the-scenes installs, where it simply says "We're getting things ready", and provides no details about what it's actually doing to your system. If you've followed these instructions so far, it should be OK to begin installation regularly.

After installing or upgrading to Windows 10, you'll need to reboot to Ubuntu to update GRUB so it includes Windows Boot Manager on its list. Before you do this, disable Fast Startup again. This is done very similarly to how you did it in step 2. The control panel and settings UI are a bit different, but most of the options are still there.

If Windows boots by default, you will need to hold down the special key for your laptop to get to the system's firmware menu. On my HP Touchsmart, that key is Esc. Other common keys are F12, Delete, F10... Your computer's manual should be able to help you out here. From the firmware menu, boot into GRUB. There should be an option to "select a boot device" or something similar, and Ubuntu or GRUB should be listed there. If it's not listed, look for an option to boot from an EFI file, and browse to /EFI/ubuntu/grubx64.efi or (if you have Secure Boot enabled), EFI/ubuntu/shimx64.efi instead. The actual paths of these files may vary depending on your options, and how your boot partition is set up, but the file names should be the same. Selecting one of these .efi files should boot to GRUB, where you can then boot to your Ubuntu distribution. Once you've logged in, open a terminal and type sudo update-grub. This will run the os-prober script that GRUB uses to compile grub.cfg, which tells grub's EFI file which entries to include, what colors to use, etc. The os-prober script should identify Windows Boot Manager, and automatically add it to the list.

When using GRUB on a UEFI system shared with a Windows OS, DO NOT install to MBR. Some tutorials list it as a crucial step to use Grub Customizer's "Install to MBR" option under the File menu. You should not do this on most UEFI systems. The MBR (Master Boot Record) is designed for BIOS firmwares, and is still used by the Windows Boot Loader to some extent. Adding GRUB to the MBR, when it's already in the EFI entry list, can cause lots of hairballs. If you need to make sure that GRUB is the first entry in the boot-order list (i.e. if Windows is always booting, even though you did everything right), use efibootmgr (see step 4.1) to view/edit the EFI Manager's boot order.